This was a Meigan Fayre type event held at Tyddyn Ddu, Cenarth. I know I used to live there.

The outstanding features about it as far as I remember were firstly, I did not do much in preparation for it I just turned up. 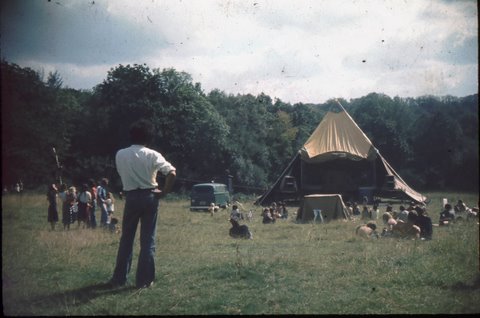 Secondly, Nic Turners pyramid stage was the focal point and his set was heavily Egyptian influenced musical style and costumes etc. He had of course produced an album of him playing in the great Pyramid at Gisa . What an astonishing flute sound what a colossal achievement. Great set

Smudger and January, were they called Jester by then ? played a very good set and were always worth the money

yep they often played for free. No Really folks they were good. Smudger is still gigging I think. 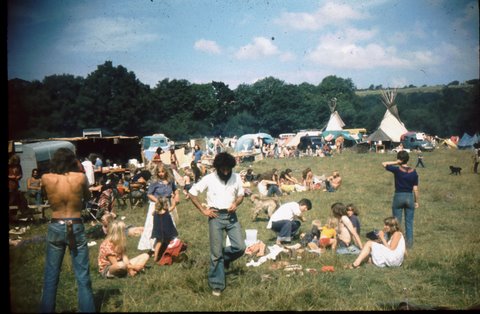 The festival was small and very friendly. All the Welsh tribes seemed to be there and honored guests from afar were also in attendance.

Thirdly, I met Ronnie Lane there he arrived in a Land Cruiser towing a caravan and set up residence and started to jam with what seemed to be all comers. Some fantastic fireside music was to be heard just recorded on the ether and having a distribution deal with the wind. Unforgettable, indescribable and extra ordinarily poignant as Ronnie was suffering from M. S. I seem to remember and he played with such sweet joy that it was hard to reconcile the inevitable demise that was not many months away. What a star what a gent. He must have just finished his album with Pete Townsend around this time.

Clive just e-mailed me with a short piece he wrote about coming across this site. here it is

I discovered the pictures of this event via a link from ukrockfestivals.com to meiganfayre.co.uk/Cenarth. If the festival you have listed is the one I attended way back then you will have made an old man very happy as I have been trying to remember where it was for many years, I have lost touch with all those who I went with so can't pick their brains! At the time I was living with my then girlfriend Maggie in my yellow 2.25 ton Commer Walkthrough in and around Marros near Pendine, we headed off to the said festival in a convoy (not THE convoy) of two possibly three vans if I remember, it had been raining heavy a few days earlier so to get onto the site was quite difficult as we had to navigate two or three fields, leaving was much more difficult, fortunately there was someone with a tractor with the long and arduous task of towing virtually every vehicle through the deep mud.

One morning we awoke to find Ronnie Lane had set up camp next to us and yes I remember them jamming round the fire, as they were so close I didn't sit around their fire but laid on our bed in the van with the rear shutter rolled up listening, however, when he played on the main stage he did ask if he could borrow my congas which I happily allowed. I was also invited by a band to join them on the main stage but I have no idea who they were, but it was in the afternoon. I don't remember there being many bands playing as there seemed to be long periods with no music.

I also remember one afternoon making many pans full of popcorn in the van and giving them out to all around our encampment area. It was a wonderful intimate festival with a great atmosphere and very friendly, sadly I have no photos, for some reason I've never owned a camera.

Does any of this tie in with your memories? One thing that doesn't tie in with me is that I don't remember it being a Pyramid stage or Nick Turner playing, although he could have played after we left. I seem to remember the stage being of the more conventional type, but as I went to lots of festivals then I could have them mixed up!

Another one I can't remember was within a couple of weeks either side, again in Wales upon a large hill covered with thick heather, we were only there for two or three days possibly over a weekend, two to three hundred people at most, don't remember there being a stage in fact there may not have been any bands! I seem to remember it took a couple of hours to drive there bearing in mind our trucks were not fast.

All the best and I hope you find this at least interesting.

Thanks Clive for that. I semm to remember a micro festival by the side of the Cardigan to Haverfordwest road just before it goes over the pass. Very laid back with a converted 6 wheel Landrover ambulance and a few other trucks and a caravan maybe. No stage no music as such > If you can imagine a festival with an interval - well this had no" fest" just the" ival" 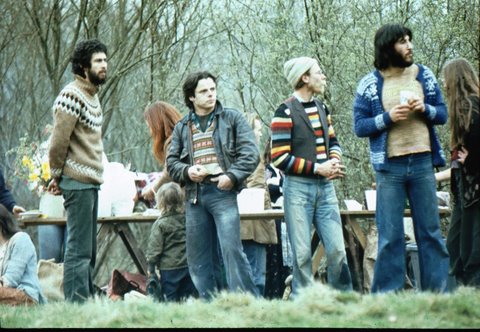 A few familiar faces here. It looks like late summer or did we wear woolly jumpers all year round back then?

If others have a memory of this event please email it in and photos too please. I know cameras were as rare has hen's teeth but maybe a few pictures lurk in hidden depths

Thanks again Celia for these photos 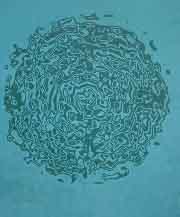